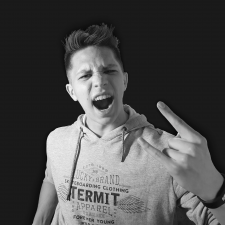 Hello! I appreciate your visit and let's get acquainted!

In 14 I with my friend wanted to create a startup. That was a site that accumulates feedbacks about companies. For half a year I pumped my skills in programming but didn't reach the first version. Because of that first what I touched was native JS and I figured out my top interest is coding. After a half year of exercise, I realized the time to create commercial projects had come. Tens of projects and gigabytes of docs led me to the current point. A year was required to upgrade the skills to high-level frameworks in JS. But... the impact that I gave was local and I didn't see the project wholly. One day I made the decision to buy Herbert Schildt's Java handbook. Two long years I spend to understand concurrency, generics, and Spring. I choose my way and it’s across Java. Maybe my mission is concluded in building large projects for providing technologies to millions of people and design their day-to-day experience.

If you are to see technologies I work with or roles that I was appearing in follow next!

Due to the company's startup nature, I've appeared in the backend and frontend developer role and even as a UX assistant.

Environment: Developer's environment based on docker which was connected to AWS application in my own namespace.

Stack: React, Node JS, Apollo, AWS: (AppSync, DynamoDB, Lambda, Elasticsearch). We developed without DI and used "containers" to split up View and logic. I should note that this approach has its own elegant design and makes architecture more flexible.

Role: Android Developer, Spring boot Developer. I hadn't had experience with Android development before that project started and I had interested in trying to solve some standard tasks with the new environment.

Task: Create a video streaming service in the local network.

In Leroy Merlin, I created my first infrastructure with 8 microservices. That project gave me significant experience in the modern back-end. Thank you, LM and appreciate the time I spent 🙂

It was the craziest time in my bio.

Role: Somebody who can create an e-store or landing page, draw a logo and fill your Instagram account with followers. Like a Superman but from school.

Thank you for your interest, I believe we'll become partners for years 🙂